Visible Satellite: The high resolution of visible satellite allows us to see the clouds in finer detail and detects exactly what an astronaut would see from space. The brighter the cloud, the more water vapor it contains. Visible satellite allows us to see the building of cumulus clouds that could become thunderstorms. The fine resolution of the image also allows us to see dust plumes and subtle low-level boundaries (i.e. outflow boundaries, sea breeze fronts) that can indicate potential areas of thunderstorm genesis.

Wind direction can be determined by looking at the alignment and movement of cumulus cloud fields, such as with cloud streets. Shear can be analyzed by observing the different directions and speeds at which clouds move at the lowest levels verses the highest levels of the atmosphere, which can provide insight into the potential for thunderstorm development and intensity.

Infrared Satellite: Rather than using sunlight to see the "brightness" of the clouds, infrared (IR) uses radiation to determine clouds, allowing us to "see" clouds at all hours of the day. Colder temperatures show up whiter and represent clouds at various heights, while warmer temperatures show up darker and represent lower clouds and the contrasting land.

Enhancements: Both IR satellite and water vapor imagery are enhanced using a color scheme that shows up features that may be more obscured using the standard black and white images. The color enhancements add detail to the images and cause things such as colder cloud tops, which are typically associated with stronger storms, to show up better. 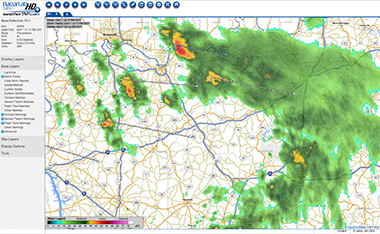 Give weatherTAP a try and you'll see why first responders, pilots, meteorologists and the U.S. military count on weatherTAP as their primary source for detailed, current and customizable weather. Just fill out the short form and you'll have immediate access to thousands of weather images including local forecasts, real-time radar, lightning data, RadarLab Local, professional aviation weather and tropical weather. And weatherTAP is always advancing so you can access a growing set of products, including weatherTAP GLOBAL and model data.
There's no risk, and no commitment, so try it today!

Get Access to:
RadarLab Local, the weatherTAP mobile app, lightning data & much more!